Coilscope compiles thoughts, research, limited hyperbole, and no cant. Before I left graduate school to start a series of small businesses, I studied Land Tenure in West Africa. But now I read mostly economics.

Businesses could believe in the wage fulcrum: if they paid employees good salaries, they could expect more revenue. It was a discovery earlier made by Henry Ford: “If we can distribute high wages, then that money is going to be spent and it will serve to make storekeepers and distributors and manufactureres and workers in other lines more prosperous and their prosperity will be reflected in our sales.”

Yet business owners will always find it difficult to accept this correlation causes their own company’s revenue. A “tragedy of the commons” is at work, since individual businesses know their own employees’ wages contribute but a tiny fraction to the national aggregate.

A company that cuts wages cuts costs, but still benefits from demand generated if other firms pay good salaries.

The 1960’s shocked business owners with news to contradict earlier lessons: government overreaches, both in Vietnam and in domestic welfare and racial policies. The Roosevelt-Truman-Eisenhower glow disappeared, teetering with 1965’s Voting Rights Act, to collapse with 1968’s demonstrations.

Businessmen saw unions align with “anti-establishment” movements, whose political targets were often the corporate sector. Wage-earning consumers could be dangerous buyers, as consumer activists fought for new rights and regulations.

EPA and OSHA seemed to some business owners the government fruits of anti-establishment and consumer activist power. So business began forming a national political machine, a modern, savvy effort to bend government’s trajectory, in its worst version an engine to create Tammany Hall in Washington’s halls.

But environmentalists, anti-war protesters, consumer groups, did not demand wages.

If a 1950s business owner could mollify himself that his labor contracts paid him back in consumer purchasing power, corporate leaders a decade later faced benefit and work rules without obvious profit feedback.

Then the 1970s ushered in inflation plus stagnation. Many economists blamed Federal and Treasury policy that held down interest rates to manage unemployment.

But inflation appears in public as salaries and prices. A company owner can defend higher prices to consumers by blaming excessive union wage demands; corporate leaders can defend stagnant profits to shareholders with the same argument.

Wages are vital political emotions. But they are so closely related to inflation it’s almost impossible to believe one or the other is cause or effect. Instead, their correlation is a symptom of the wage fulcrum. Employees demand wages as employers demand profit.

Data from the Bureau of Labor’s Wage and Salary Series, and its Consumer Price Index of inflation, are plotted below. The blue line is the CPI index, red is wages. 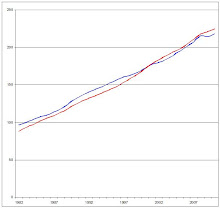 Nixon’s Fed Chairman Arthur Burns said “monetary policy could do very little to arrest an inflation that rested so heavily on wage-cost pressures,” which could be interpreted as an out-of-control linkage between business revenues and employment costs.

In the 1980s, Volker’s hard-nosed anti-inflation policy worked to cut consumer prices, but not company asset values, so that profit margins increased. The era’s great jump in unemployment was in part a corporate effort to shed costs, as businessmen disconnected employee wages from company profitability.

But most US companies sell to Americans in the US, and most US companies do not outsource overseas. Their dilemma is that aggregate American wages have stalled, per capita, since the 1970s anti-wage consensus.

In the 1990s information technology and more college graduates increased worker productivity. This lowered even non outsourcers costs, and kept consumer-friendly prices generating profit. But information technology’s productivity boost seems to peak in the first decade of its deployment. In the 21st century, college graduation becomes more difficult for people to afford, and less accessible to graduates of underfunded public schools.

The 21st century rang its bell. Back in the ring, finance firms puffed up consumer demand with credit, but the bigger they are, the harder they’ll fall. Credit needs servicing, and many of today’s wages can’t. It’s a technical knock-out.