Coilscope compiles thoughts, research, limited hyperbole, and no cant. Before I left graduate school to start a series of small businesses, I studied Land Tenure in West Africa. But now I read mostly economics.

(e) The credit crisis was a Minsky moment. Another Minsky idea sheds light on inflation.

Hyman Minsky achieved renown in during the credit crisis, a decade posthumous. His portrait of America’s financial sector cycling into the verge of meltdown reads like recent history. Quixotic yet level-headed, Minsky refused to collapse ideas into flat-land orthodoxy. He deduced how post mid-1960s American capitalism oscillated between overheated expansion and crisis, rather than gravitating towards equilibrium. His major work, published 1986, hit several themes solidly: the inevitable growth of “too big too fail” finance institutions; the central bank’s increasingly necessary, yet paradoxically dysfunctional role in preventing depressions; entitlement transfers’ long-term impediment to big-government’s fiscal and employment responsibilities; and how an investment-oriented rather than employment-oriented economy loses strength.

As the Fed and government subdue financial downturns, Minsky explained how financial innovators gain market share. Having gamed the system, during the next expansion their windfall profits lead to mass speculation. Market sensitivity increases, until asset inflation anxiety triggers a bubble bust. Government responds by increasing public consumption and business demand, though the Fed now plays a bigger role than fiscal policy. An economy that cycles this way pushes the envelope of adaptation; Minsky believed it becomes less resilient.

High finance is like a pilot testing higher and higher atmosphere in a jumbo jet: she stalls, falls, guns the engines, catches wind, and flies higher again. Each time it happens, passengers get more anxious, co-pilots itch to seize control, and fuel gets used up. For hucksters selling flight insurance in rows and galleys, it’s great business. The airline’s mainstream theories claim the jet will obtain equilibrium at its maximal height. Minsky thinks this is wishful thinking; the skies will always tempt high fliers, the cycle is inevitable.

Minsky didn’t have fear of flying. He thinks a service that brings together economic factors and enables growth, but neither creates much nor causes great efficiencies, shouldn’t threaten the entire political economy without indemnity.

Underlying Minsky’s ideas was a firm belief that people search to find ways to exploit loopholes and methods to make money without producing or providing anything. This particular kind of opportunism occurs at all economic levels; the social security recipient who could work, the union worker who can avoid work, the manager who makes up needless work, and the financial wheeler dealers whose craft is to make huge sums without creating work. Social security, unions, managers, and financiers play vital social roles. But all need regulation to avoid opportunistic pitfalls. Minsky found the banking industry’s deregulation demands as absurd as unions that insist on protecting bad workers.

On a personal level, growing up in New York city, I saw garbage collectors get higher wages than police and teachers, though they neither create human capital nor save life and property. But when garbage workers went on strike it stunk. This constant antagonist ground people down, and the public folded. Some claim this proves garbage removal is more important than teaching or firefighting. They confuse continuous and discontinuous pain; humans respond differently to having a constant negative experience than to worrying about catastrophe. Stick my finger on a hot stove, and I’ll trade all the tea in China for its removal, even though I know if the house burns down it will be far worse.

Likewise, the finance sector has become indispensable in the provision of constant credit. Minsky noted that as they supply ever-ready credit for firm and consumer liquidity, finance institutions supplant the Fed in money supply (a blind spot in monetarist hypothesis). Businesses, homeowners, and sovereign states require rolling credit as often as garbage gets removed from city streets. Stop credit movement, and it stinks for everyone. The world won’t end, civilization carries on, but the economic landscape is littered with hurt: unemployment, bankruptcy, and default. When you bail out garbage men or banks, it’s not because they’re as valuable as doctors: it’s because they’ve cornered a market that hurts. Fire them, but the next group gets the same opportunity.

If Minsky resigned himself to these processes, his work might have been subtitled “How I learned to stop worrying and love instability.” Instead its unforgiving title is “Stabilizing an Unstable Economy.” He recommends government replace unemployment insurance with Civilian Conservation Corps programs, replace welfare with a universal child allowance, and repackage finance into the smaller banking sector of 30 years ago. Minsky’s tone is more like Hayek than like his self-proclaimed kindred soul Keynes. He lacked an MIT economist’s mathematical fluency, nor had a Harvard economist’s narrative phrasing. Essentially a logician, his choppy prose deductions clothed ideas with off-the-shelf, ill-fitted terminology. For example, he labeled market speculation “Ponzi finance”, and ordinary banking “hedge finance”, yet defined the first as not criminal and the second as not hedging.

Because economics is a social science, however precise its exotic formulas, its relies on rhetoric to reach audiences. Econometric and stochastic analysis make dull reading, perhaps, but their meta-message is powerful: anything with this degree of mathematical sophistication must be scientific. Someone like Minsky is probably doomed to anonymity, until he’s rediscovered because his predictions come true. The Great Recession played out Minsky’s script, for which his ghost got 15 minutes of fame.

But logic isn’t false because a logician writes poorly or doesn’t deploy calculus. Given Minsky’s accuracy in distinguishing our credit crisis, what of his less known hypothesis? One concerned inflation, a big issue in the 1970s and 80s. The standard explanation of the era’s inflation dynamics blamed union wage pressure first. Minsky began from a work organization perspective: he split the American workforces in two parts. One part includes employees who make consumer goods or sourced consumer product inputs and distributed outputs. The other part includes employees who manage, administer, or market consumer goods, and also those who provide retail and professional services, and finance.

Minsky noted that oversight and rainmakers cost more, yet lacked the shop floor’s quantifiable productivity. Consumer demand is the economy’s biggest engine. If administrative costs increase per consumer product output, it requires more mark-up to earn profit. Inflation becomes the cost of hidden administrative or financing productivity that fails to keep pace with other parts of the workforce.

Minsky’s hypothesis concerns both the organization of work in every economic sector, and the organization of work between sectors. He posited, and demonstrated with some time-series data, that employers’ spans-of-control, the ratio of supervisors to those they managed, correlated with inflation. The fewer people a manager oversees, across all economic sectors, the higher inflation. Minsky also argued that as non-consumer good sectors grew as a proportion of the economy, they would cause a similar inflation impact.

Finance has very high administrative costs, and it’s often hard to specific its output value. Government is vulnerable to the same weaknesses.

Thus Minsky believed that work organization causes inflation, certainly more than organized labor demands. It’s a novel idea whose merit can be tested, because Bureau of Labor Statistics keep track of supervisory and non-supervisory workers. BLS has over three decades of these facts, for at least 14 different economic sectors. They provide this data, among other ways, as a ratio of supervisor to non-supervisor numbers.

I looked into this, because I’ve heard that organizations abandoned hierarchical management pyramids over the past few decades. I assumed managers’ spans-of-control, the number of workers they oversee, increased as businesses culled middle management. More workers per supervisor would grow the BLS ratios, so Minksy’s inflation should decrease.

Fig 1. shows the Consumer Price Indicator’s annual levels 1980-2010. Fig. 2 illustrates inflation’s annual change in the same chart as inflation itself. It applies a logarithm (base 10) to the CPI, and modifies its annual rate of change to fit the same graph (change rate times 10 times e). 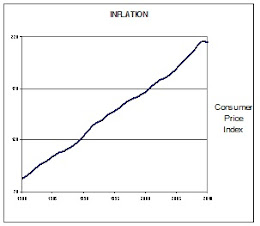 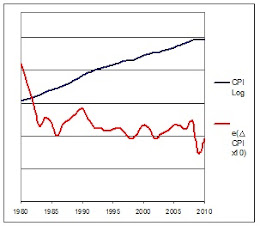 These figures show how inflation has moderated, while maintaining a steady increase (with 1980-1982 excepted).

Next I reviewed BLS data. Fig.3 shows the R squared correlation result of 14 employment sectors with the CPI data, from 1980 to 2010. 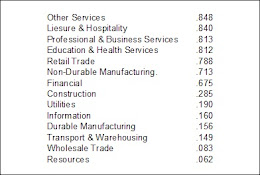 This statistic suggests certain sectors have span-of-control trends that correlate with inflation: professional services of all kinds, education, and retail trade. since a high R value can express data series moving together or moving apart, they are graphed below. I invert the BLS span-of-control ratio, so that amplitude represents smaller span-of-control: a business sector with shrinking supervisor to non-supervisor ratios. This means managers have fewer people to oversee, not what business media have led us to expect. But it is what Minsky claimed would correlate with inflation, so as inflation goes up, I wanted the ratio to increase, too. 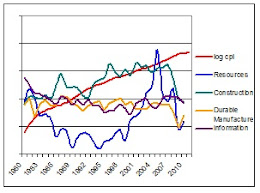 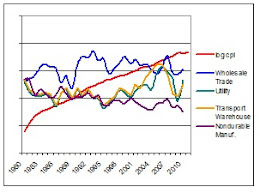 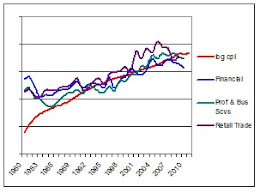 Fig. 4, 5 and 6 show that the span-of-control changes in Manufacturing, Resources, Construction, and the supply chain sectors of the US economy varied over the decades, with some attenuation of managerial oversight. Organizational charts flattened a little. These changes did not correlate with inflation’s trend.

Fig. 5 shows a different picture. All professional services, health care, education, and retail trade sectors shrunk their spans-of-control, according to BLS data. This trend matches the change in inflation, as Minsky predicted.

Those sectors of the economy that make and build things, find energy and resources for production, and ship and store products, show no Minsky correlation with inflation. If widened spans-of-control are a proxy for efficiency gains, these sectors appear to demonstrate this form of productivity. They should not, according to Minsky, drive inflation.

The economic units that retail to the general public, or provide any and all services to them, including business and finance, show a distinct Minsky span-of-control correlation with inflation. Their organizations have become less flat, with more managers per non-supervisors, which Minsky considers a proxy for inefficiency. Productivity in this broad spectrum of economic activity has lagged.

Further, these latter sectors are those most distant from technologically required inputs needed for consumer product production. While resource exploitation, manufacturing, and shipping have granular productivity measures, the economy’s service sectors, education, health care, and finance do not. This further supports Minksy’s inflation hypothesis.

Has Minsky identified a basic inflation cause, or do these correlations stem from some other, more fundamental factors? Perhaps taking the BLS data and convolving it with population trends would be useful. What percent of workers does each economic sector contain? Over the past decades, how have their relative populations shifted? Do these factors further explain span-of-control impacts on inflation?

In conclusion, Minsky’s inflation logic gets plenty of statistical support. It suggests his underlying reasoning, focused on the structure of employment and a distinctly unique idea of productivity, deserves greater attention.